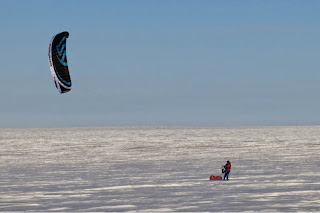 "You push me, to go the extra mile..."
In 2005 the polar community was electrified by the daily updates from a team of three Norvegians crossing Greenland south to north from Narsaq to Qaanaaq.

"... keep on pushing, like nobody ..."
At this time, many people outside the still very confidential world of polar kiting considered exploiting the wind with kites just as an additional progression aid, rather than the true motor of an expedition.
But they used freeride equipment instead of nordic touring skis and soft boots.

"... every race I win ..."
They kited upwind, and announced incredible distances. They broke the 24 h distance record for landkiting, and back then, they were the fastest expedition on ice ever.

" ... you push me, when I want it all to end ..."
And later they published a short video on YouTube, bringing lightness, speed, and elegance into a world of frozen beards and tired faces.

" ... every move I make, every step I take, every thing I do, its all because you push me ..."
We must have watched it hundred times, scrutinizing every detail of this incredible adventure. We witnessed the birth of an instant classic.

"... to go the extra mile, when its difficult to go ..."
The video is still there (short version) There is a little secret. Mute the sound and start the clip synchronously with 'Push' by Madonna to reveal its original power ...

Hello to Niklas, Trygve and Karl.

The weather is once more determined by a katabatic regime, with the Greenland anticyclone pinned close to our west. We were navigating the narrow corridor avoiding its "swampy center" without wind on one side, and the more pronounced slopes towards the border of the icecap to our east on the other side. With our Speed 3 19 m2, we first ascended up to 2860 m, looping our kites most of the time, crossing the shallow ridge that extends from the summit of the icecap towards a little col and the mountains around Gunnbjorn Fjeld in the east. From there, we were tacking downwind into the large funnel dominating Kangerdlugssuaq Gletsjer, which is draining the ice towards the homonymous fjord.

Marc had predicted "unlimited visibility", and despite the formation of some high clouds, we shortly got the view on some snowy summits very far to the east south east, right before setting camp after 159 km. It could well have been Gunnbjorn Fjeld, the culminating point of Greenland situated at a distance of about 165 km from our route.

We have come a long way back south since our northermost point! Today we passed the latitude of the North Kap of Europe, and in the evening we already feel that the sun is again much lower above the horizon.