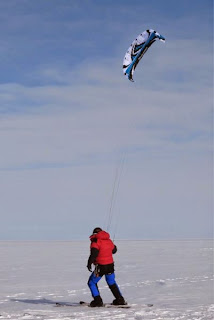 We were a little late to make the best of the morning session. Winds of 10 to 18 km/h got the Speed 3 19 m2 flying on the 67 m lines. Sometimes even well powered. The wind direction wasn't too bad with respect to our north-westerly heading, yet progression was sluggish. We stopped for lunch. We continued. Until we admitted that we wouldn't go any further. We set camp after only 62 km to wait for better conditions in the evening, leaving the kites outside, ready to go on. Parking the big wings with a closed cell construction on long lines precisely isn't always easy, so we stopped at about 50 meters distance of each other and put the tent in between. The evening did not bring better conditions, as expected.

The snow was quietly falling vertically on our tent, instead of being driven horizontally as hoped. When we packed the kites and tried to haul the sleds closer to the tent, we finally understood. It was almost impossible to move the sleds alone. The snow was again cold, squeaky and sluggish. The resistance of our sleds on the cold snow held us back. Already during dinner, the thermometer plummeted to -25 C, followed by a cold night. When lying on my back, slowly breathing, tiny ice crystals fall back on my face with the rhythm of my respiration.

We realized, that already yesterday we passed the latitude of Grise Fiord in the south of Ellesmere Island.
Image: Speed 3 19 m2 on long lines.

Posted by cornelius strohm at 5:26 AM