Food for thought and thoughts on food 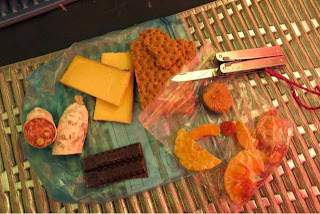 Rest day - Marc had strongly recommended a rest day, as the south westerly and westerly winds would make progression along our route difficult without being pushed too far east. We thought we knew better. We had an entire day of upwind kiting (on 8 m2 Beringer Skisails) in strong winds in 2008. We had made our first precious kilometers to gain altitude upwind uphill at the beginning of this trip. And we had kited slightly upwind yesterday in lighter winds with our Speed 3 19 m2. And anyway, at home, or in Finse, without the pulks, this would just be ridiculously easy. We tried with the speed 4 10 m2. The kite was fully powered at windspeeds of at least 30 km. But we could not find a comfortable going. Soft at the edge of the window, strong opposition in the center when at speed, but we didnt find the golden middle. Underpowered on the Beringer 8 m2. And we even tried an unnamed 12 m2 spare kite (a bit too sporty in its original handle configuration on long lines in these conditions) on the Speed bar with 21 m lines as a last resort. Nothing worked comfortably. We admitted that a rest day would be a good choice, in particular with a favourable forecast ahead. And while went out as if we were going to work this morning, we will certainly be eager to kite againg tomorrow or already tonight. Its a little weird. We absolutely need the rest from time to time. But when the occasion is there we always first consider it a loss, instead of appreciating it right away for what it is.

Nivology - there is not that much precipitation, especially here in the north east. And while we had a short occasion to kite in dry powder on the western side of the icecap in 2008, this is probably rare, as the fresh snow, if dendritic, is quickly transformed to fine grains through the continuous mechanical action of the wind. But here the snow likely falls already in small crystals in most occasions. It gets quickly hard packed. When the surface snow gets covered and lowered into the mantle it would gradually turn into more or less compact ice under the increasing pressure. Sometimes there would be surface melt. Generally the snow would undergo destructive transformations. Thats what I thought, and I didn't really look any further. Yesterday, when digging a little when mounting the tent, I was therefore surprised to find a continuous layer of large grains (platelets/faces planes or maybe even beakers/gobelets) of 80 cm thickness right below the hard and partially glazed crust on the surface - a clear sign of constructive transformation under medium to strong temperature gradients close to the surface. It may also explain the surprising surface cracks that had started to appear on the icy patches between the sastrugies.

During the day: Muesli and chocolate bars. Water, tea/infusions in our thermos bottles.

Nutrition facts - our daily routine here is strenous for the body, even if we are often not aware of it. There are the typically 5 to 11 hours of progression. This may not really appear to be an effort, as we are pulled by the kites, and the main force goes directly to the harness and from there to the sleds. Yet we have to continuously hold an edge, re-direct the traction of the kite to the sleds, absorb the shocks, and fly and work the kite which generates some pressure in the bar. Although an incomplete analogy, one may try to compare it to downhill skiing. 5 km are surely considered a long descent in a ski resort. 100 km would find their equivalent in 20 runs in one day .... Add mounting the tent, and the continuous exposure to the cold. Our insurance even requires a daily ration of 5000 kcal per person and day to be valid, more than twice the usual calory intake recommended for an adult man. And while we were unable to eat the full rations in the beginning and kept some spare, we now start to enjoy the entire portions, as Mika wrote yesterday.
Image: lunch ration with Wasa bread, sausage, cheese, dried fruits, and chocolate.

Many thanks to the Epicerie Arax in Grenoble for their help and patience in selecting about 10 kg of various dried fruits, and 10 kg of nuts and grains! We also gatefully acknowledge the fromagerie Barbieri from the marche de l'Estacade for choosing different varieties of cheese that would withstand the conditions of transport and travel, and for vacuum packing of the 67 daily cheese rations.


Posted by cornelius strohm at 4:38 PM