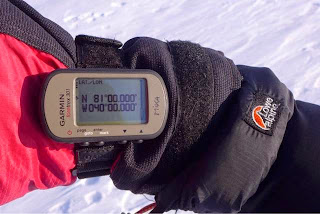 When we left camp, we did not have any particular expectation, except a favorable forecast for the day and those to come. It took us 4 km to find out that 10 m2 were not enough, before we switched to the Speed 3 19 m2 for the rest of the day. As we were heading nort-east, the wind strengthened and the surface gradually improved. Sastrugies gave way to alternating hard icy patches and finely ground driving snow with a velvet feeling to it. Kilometers were now passing quickly, and we were approaching the unadmitted objective:
When the windspeed attained the absolute limit for these kites, and our legs were tired from the enormous friction of the cold snow, our GPS not only read 206 km but also 81 N 40 W, - the northermost point of our expedition.

In the end we have made a good distance, entered the North East Greenland National Park, exceeded the latitude of the northermost part of Svalbard (Nordaustlandet island), attained the northermost point of the expedition, covered nearly 20 degrees of latitude since the start, and set camp at about 150 m from the "confluence point" 80 N 40 W and at 1005 km from the pole. A busy day!
We had hoped to see "land" from here, yet unfortunately we do not, - at least not with the cloudy conditions and driving snow.

From now on we are heading south - back "home".
Reaching 81 N is arbitrary, yet it meant a lot to us. When we sketched the first versions of our future route, it turned at about 80 N. But we thought, it didn't look right, and that we were cutting short. Without further thought, we moved the northermost point a little higher. As time passed, we were busy with a lot of other things in our preparations. Until we had to find an insurance for our project. It turned out, that the company that had covered us in 2008 could no longer make an offer for a kiting expedition. Nor could most of the big insurance companies. Ultimately we were left with only two options. A very competitive one, covering only up to 80 N, and a much more expensive offer if we were to go beyond. We chose the latter.
Image: Confluence points are the intersections of parallels and meridiens. And while their location is purely a result of the convention of the coordinate system in use, some people take it as a fun challenge to go out and look what the world looks like at exactly these places. We thought we should do the same, as we were already so close by.

Thanks to the team Vieux Campeur Grenoble for their help and their patience, and to Laurent for his message.

We would like to take the opportunity, to acknowledge our partners, without whom we wouldn't be here:
Many thanks to Ramon Schoenmaker, Ernst Novak and Flysurfer Kiteboarding, for helping with the kites that are powering our progression. Thanks to Nico Lelarge, Flysurfer France.
Its a pleasure to have the support from Roger Daynes and Snowsled Polar for the sleds. Its not our first expedition with different models of the ice blue plastic pulks, and once more they do not let us down.

Posted by cornelius strohm at 5:40 PM