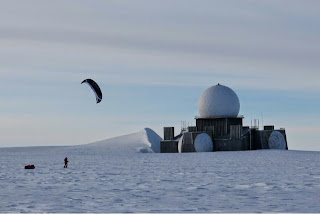 "The morning preparations took us far too long"
This remark of one of the great polar explorers (Nansen or Amundsen ?) remains unfortunately still true for us today. We got up at 7h20,
but when we had finished breakfast, packed up our belongings, digged out the tent from the snow drift of yesterdays little storm, and loaded the sleds, it was already nearly 12 o clock.
The wind was a little lighter than expected, but still strong enough for our 8 m2 Beringer Skisails, and the weather was a little better than announced, so we didn't complain. We covered about 110 km in nearly perfect conditions, before the wind weakened and we switched to our Speed 4 10 m2 kites.
DYE 2. After 20 more kilometers, we reached the abandoned american military radar station DYE 2, one of the impressive relics remembering the geographical role of Greenland during the cold war. It was part of the distant early warning line (DEW line) and its purpose was to detect Soviet intercontinental nuclear missiles in time to allow a response, before they would hit the United States. When it was abandoned, it was left on the ice as is.
Camp Raven. Just a few hundred meters from DYE 2, the americans prepare runways to train (Hercules) pilots for missions in Antarctica every other year, the even years. Camp Raven is occupied by a couple of two radio operators, Marc and Lou, who regularly prepare the runways with a Ratrack / Pistenbully, and ensure the radio contact with the pilots. During our South-North crossing from Narsaq to Qaanaaq in 2008, we had the pleasure to be invited by Mark and Lou, together with two other expeditions who happened to cross this place at the same time! We would have enjoyed meeting the couple again, but the camp was not yet installed. Its probably just going to happen these days, as the runways were already marked with flags, but not yet prepared, and the tent of the camp was not yet there... Greetings to Mark and Lou.
So we continued our way for another 24 kilometers before we set camp. We have passed the latitude of the northermost point of Iceland (bye bye Laurent) and crossed the polar circle by the way.
In the morning we had started on a near perfect surface, which gradually got rougher during the day. And even though there are barely any sastrugi worth the name yet, we have to complain first little damage (holes in bags for example) from the friction and shocks in the eternal shaker the sleds have now become.

Posted by cornelius strohm at 5:36 AM