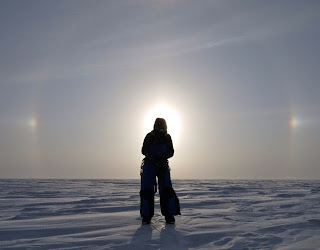 When we left our camp, the sky was covered, and the wind was driving snow over the surface alternating icy patches and sastrugies. The sun appeared as a faint disk behind a curtain of foggy clouds. There was visibility, but no contrast, and we were kiting through a universe of shades of white. The sky was matte, while the snow was luminous but pale. The sastrugies appeared in brighter tones, but without any shadow, that would allow to appreciate their hight. Lacking any notion of distance, they could as well be right in front of us, or still hundred meters away. Sometimes even the slightly darker line separating the ground from the sky disappeared, and everything blended into a uniform cotton-white.

Relying mostly on tactile feedback while skiing, we had at the same time to be supple to absorb the never ending bumps, yet strong to hold the edge and keep the direction. Our heading was once more almost downwind. Skiing like this, we were frequently reminded of the scene in their film "In the footsteps of Nansen (?)", when Borge Ousland commented on Thomas Ulrich: "You are skiing like an old lady". Coucou a Jean qui nous a souvent rapellé cette citation lors de notre dernier séjour a Finse.

Later, the sun acquired an orange glow, the sky gradually cleared, and the visibility improved significantly. We made a break under the nice parhelic generated by refraction from tiny ice crystals suspended in the air. For the last 20 km we enjoyed the excpetional lighting only places like this can offer before our legs had enough and we set camp.