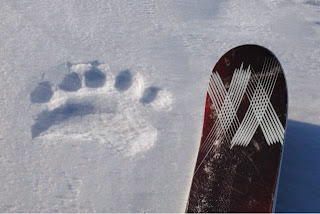 This morning there was a little air of spring. We are again more shifted into the 'day' and got up, when the sun was already warming the tent. Outside, the wind was not as cold as the last days. Everything felt a bit easier today. And for the first time since at least two weeks we started kiting without the down trousers, down jacket and over-boots.

We were travelling south-south-east with our Speed 3 19 m2 at 160 degrees, while he must have been heading north-north-east at about 25 degreess. After about 80 km, the tracks of our skis and sleds crossed those of his pawns at 77.963 N 30.980 W. We are not alone!
Today we had the rare chance to observe the absolutely unexpected: polar bear tracks far into the 'Inlandsis'.

While this big predator is known for his enormous autonomy, necessary to survive in the cold of the arctic winter, this seems absolutely remarkable to us. There is no food to hunt for here on the icecap. We estimate the shortest distance between the point where we crossed the tracks of the animal to the shore in Jokulbukten (Glacier-bay) in the east to about 200 km. And if we naively extrapolate his heading to the north eastern shore, he would have nearly twice this distance to go in order to reach Danmark Fjord.

We should likely be more happy than worried. This animal was certainly determined in his direction, and we follow our heading for some time. At an angle of 135 dgrees, our tracks had to cross somewhere. Looking at the prints, some had already become positive. The compression under his huge weight has prevented the softer snow from the erosion by the wind. There must have been some time since he has passed. How long? And how incredibly small is the probability for a meeting in both, space and time?

We are legally required to be prepared for such an encounter, which is indeed possible in particular close to the coast. (Post on our blog: "Firearm permit - aiming at safety".)

We had a break at this remarkable place, put on our down-trousers again for the cold of the evening, and continued. The wind was picking up and we tried to switch down to the Speed 4 10 m2. An unlucky choice, and after 15 km of waving and some loops we were quickly back on 19 m2 before we finally set camp after covering 130 km when the wind increased again.

Today, we have crossed the latitudes of Longyearbyen and Barentsburg in Spitsbergen.

We didn't mention sastrugies. They are still there and have become a part of our daily life - likely still for a long time. They come in an infinite multitude of shapes including ridges sometimes separated by canyons, shark fins, breaking waves, spinxes and table mountains. And while they are all different, their common principle of formation through the wind gives them an artistic unity. The lighting can turn them into fantastic landscapes. Yet from a skiers perspective, they look a little less romantic. We have entered and left regions with and without, and we can sometimes observe their formation. We are wondering how they disappear, and when ...


Posted by cornelius strohm at 1:32 PM