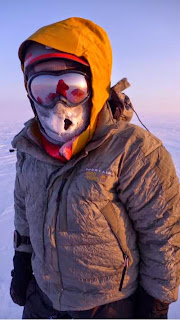 We were warned: "Any wind you will experience in the morning will die out soon" and: we should consider to get shifted and kite through the night. And even though we got out a little later, we still were fooled. The wind weakened, and despite changing the lines of our Speed 3 19 m2 to 42 m, there soon was no choice but waiting.

At around 19h30, the wind picked up again. We did as recommended, and kited through the night. And while there is always twilight at our position at this time of the year, there are still a few hours where the sun drops below the horizon. So we enjoyed the sunset a little on the left of our northerly heading and did not stop to kite until it appeared again a little on the right of our course a few chilly hours later.

We finally had good going with a few moments at speeds exceeding 50 km/h, despite the very cold and a little slow and sticky snow (making loud squeaky noises at each, when we were walking to prepare the kites and to set camp). We quickly left the latitude of Illulissat behind us.

After sunset the wind strengthened, and covered the ground in thick driving snow. We switched down to the Speed 4 10 m2, for the last 50 km before mounting the tent at the latitude of Quervain Bay and Disko Island in the orange glow of the snow drift in the early morning light.

Before leaving, I had replaced my gore tex jacket, as the old one had already quite some mileage. I wanted to be absolutely sure that there wouldn't be a seam or zipper causing trouble while out here on the icecap. Not certain, I have made the good choice: it came with many labels an stickers reading "pro" and I do not remember what, and it has ripstop inside and out. But yesterday, the tongue of the slider of the front zip broke without any good reason. And while it does still close, it needs taking off the gloves and fiddling around. Not very nice. In 2008, Mika had an even more annoying case. On his jacket of a different brand, the front zipper stopped working entirely.

Image: Cornelius, fully geared for a cold night. Down trousers and down jacket worn above a base layer of wool and a gore tex shell. Full face mask, helmet, ski googles, over-gaiters over the ski boots, under-gloves and mittens. Not exactly easy to dress up for a night out on the icecap....
P.s.: Mika wishes to dedicate these first thousand kilometers to his brother Remi.

Posted by cornelius strohm at 1:03 PM