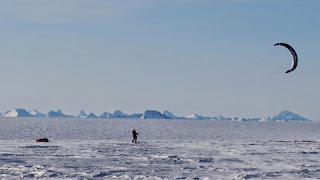 We again started out with our Speed 4 10 m2, navigating a succession of dimples, depressions, and ascents in terasses. On our progression map, one can actually see some wrinkles in the isolines close to our route. And the surface was still rough. But soon something else caught our attention. After about 10 km we got a glimpse at two summits to our left, at a bearing of about 135 degrees. In the roller coaster of the hilly terrain, we repeatedly lost and caught their sight again before the panorama of an entire mountain range finally magically unfolded in front of us.

We have not seen land for more than 30 days. This is incredibly rewarding after a period of difficult progression! Even more so, as we had hoped we may get a view of the secondary icecaps of Peary Land at our northermost point, or the rocks of Dronning Louise land a few days earlier. Yesterday we even started to worry whether we would finally be able to see those big mountains.

Image: Mika in front of the Mountains of Kong Christian X Land.

We wonder how many people had a chance to enjoy the view of these mountains from the icecap since the meeting of the motorized (weasels) icecap crossing expedition of Paul Emile Victor, and the geological sledging party of H. R. Katz in 1951 at Cecilia Nunatak? And how many people have actually reached this place on skis?

We were aware of how close were scratching the Nunataks of Kong Christian X land to our east, and during the preparation we worried how far we could actually approch the border of the icecap.
" ... but the weasels always broke through the snow bridges which covered the large crevasses. We were forced therefore to leave them behind.." H.R. Katz 1951.

On the other side, we really wanted to see land!

"We found that the crevassed area at the edge of the icecap extended much further westwards, than we had expected and to an altitude of more than 2600 metres. ... a large barrier of extensively crevassed terrasses, icy slopes and hills falling towards the nunataks lay to the east of our route. On skis however, we found that we could cross it without too much difficulty." H. R. Katz 1951.

We originally planned to stay at 2700 m, but moved the route even a little further up after a detailed look a satellite images showing the region at the end of the season with the lowest snow cover. In the end we did not encounter open crevasses nor any visible snowbridges.

When we started to loose this incredible view, another welcome surprise compensated for the loss. The undulations of the terrain became weaker, and the surface quickly changed from a cheese grater to that of a billiard table. We even found stretches of this perfectly smooth surface covered with a thin layer of soft snow with a velvet feeling. Similar to what Eric had mentioned for the regions further south during our satellite phone call.

After 100 km the wind eased, and we swithed up to our Speed 3 19 m2 to continue a little further. The kilometers were flying by quickly, and we enjoyed the feeling of effortless progression, that we had entirely forgotten during the last two weeks. After 171 km we set camp a little south of the latitude of the summit of the icecap.

The report "Journey across the Nunataks of Central East Greenland, 1951" by H. R. Katz can most likely still be found on the internet.

Posted by cornelius strohm at 8:45 PM